Murray’s Brewery loves vodka so much that the craft brewer has created its own festival to honour it! The distinctive aroma and flavour of arguably the world’s most loved spirit, will be showcased at Murray’s inaugural “Vodka & Vibes in the Vines Festival” across the weekend of 19 and 20 January.

“Most people know us for our experimental beers, but we’ve recently begun experimenting with craft spirits too – and we’re loving it! So much so that we’ve created a new festival around one of our favourites, vodka,” said brewery owner, Murray Howe.

“We figure partnering vodka with live music will create the perfect atmosphere for some chill out time with friends and family. After all, vodka, which dates back to the Russians in the 14th century, is known for its calming effects. And even if vodka is not your thing, there’s so much going on at Murray’s this January you’re still bound to have a great time anyway.”

Free live concerts will feature across the weekend – headlined by the Nano performing Sunday 20 January. Enjoy a Latin spin on your favourite covers, expanding from genres such as pop, rock and reggae.

Murray’s ‘ONE Pineapple’ premium vodka has been infused with fresh ripe pineapple, and a hint of vanilla. It’s smooth and sweet with natural fruit flavour.

Murray’s ‘ONE Coffee’ has been brewed in collaboration with local award winning roaster, Sprocket. Carefully selected beans have been infused with the premium vodka to create a unique spirit, with a roasted coffee aroma.

Learn all about distilling, and getting the most out of tasting craft vodka! Vodka masterclasses will be run at 1.30pm each day of the weekend by Murray’s distillers. The class costs $5 per person, and runs for 25 minutes. Bookings essential.

Murray’s will be serving up a range of non-traditional vodka-based cocktails – as you probably haven’t experienced before.

Of course the usual line-up of Murray’s award winning craft beers will also be pouring. The kitchen will be serving up great summer barbecue dishes, beer-based gourmet pizzas, delicious burgers and an array of healthy food options and kids’ meals too. And Murray’s Brewery Bus will run as usual on the weekend.

“So come join me and kick back as you sample brand new delights for the senses this January at Murray’s Vodka & Vibes in the Vines!” said Murray. 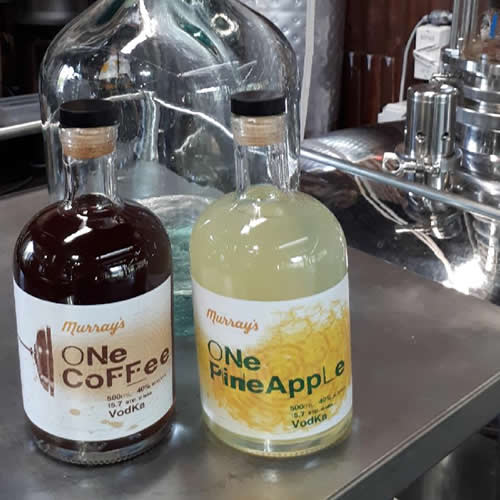