Murray’s Brewery is celebrating American Independence Day from Saturday 4 July – for the whole weekend! Yes, the distinctive aromas, colours, flavours and sounds of America will be showcased again at its Bobs Farm brewery and winery.

Join patriots around the world to embrace one of the most popular beer styles, IPA’s (India Pale Ale). On offer will be 2 new limited edition IPA’S.

First up is Navel Gazing, the best navel orange infused beer we’ve ever made.

This IPA takes the distinct and intense character of navel oranges and pink grape fruit and marries them with carefully selected hops that enhance and complement their citrus flavours and aromas.

Citrusy and fruity, with notes of pineapple and tangerine. A sticky, caramel-laden malt body compliments the fleshy fruit, followed by a long, grapefruit-inflected hop finish.

Our 2nd new release is our Icarus IPA. This is super hazy and thick in appearance with a thick head of foam. This style is known for the intense juicy hop flavour, a full creamy mouthfeel and low bitterness.

The kitchen team will be serving up a finger-licking-good array of USA-themed food specials, such as Hawaiian Pizzas from our outdoor pizza oven and giant Texan BBQ platters.

FREE concerts will be performed both days including:

“The Fourth of July is a significant national holiday. And while it’s usually associated with fireworks, parades and baseball games, we’re paying tribute through the release of some truly awesome American-style beers and American winter food specials,” said brewery owner, Murray Howe.

“We’re inspired by the unique spirit of entrepreneurism found in the USA. For Fourth of July weekend we’ve brewed some brilliant American IPAs plus we’ll have our award-winning Fred IPA.

“American beer styles are evolving every day. There are so many different flavours to enjoy and expand your experiences. So, make sure to stop by Murray’s Brewery this fourth of July weekend for a chance to taste our American beer tributes” says Murray.

Murray’s Fourth of July Weekend starts on Saturday 4 July through to Sunday 5 July. 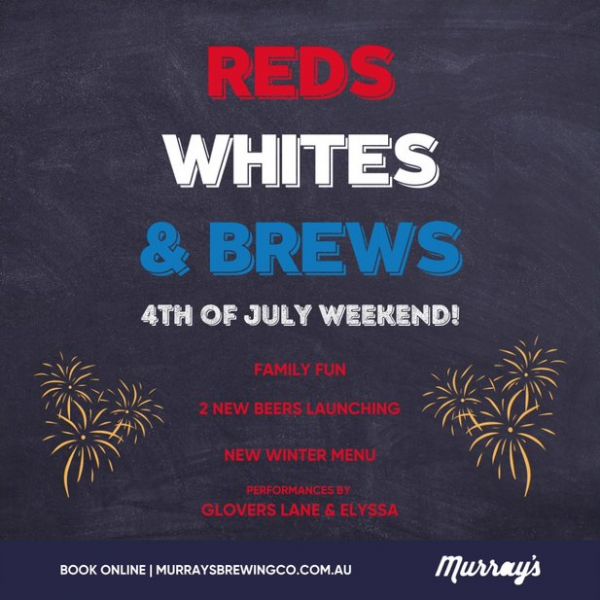