STARTS THIS WEEKEND AT MURRAY’S BREWERY

Murray’s Brewery is celebrating American Independence Day from this Saturday 7 July – for a whole month! Yes, the distinctive aromas, colours, flavours and sounds of America will be showcased again at its Bobs Farm brewery and winery right across the month of July and into August.

These school holidays, join patriots around the world to embrace one of the most popular beer styles, IPA’s (India Pale Ale). On offer will be 12 USA-themed beers – 8 locally brewed at Murray’s, and 4 brought in from the US-of-A especially for the occasion – released across the month.

The kitchen team will be serving up a finger-licking-good array of USA-themed food specials, such as a belly-busting Elvis Burger filled with bacon, peanut butter and ‘jelly’; giant BBQ platters and popular favourite, chicken wings done lots of different ways.

American-themed FREE concerts will be performed every weekend including:

“The Fourth of July is a significant national holiday. And while it’s usually associated with fireworks, parades and baseball games, we’re paying tribute through the release of some truly awesome American-style beers and dude food,” said brewery owner, Murray Howe.

“We’re inspired by the unique spirit of entrepreneurism found in the USA. For American Beer Month we’ve brewed some brilliant American IPAs, including our hoppiest ever Thunderbolt IPA as well as a blood orange IPA. We’ll also be celebrating with classic American Pale Ales. But I’m most excited about our very limited edition ‘SMaSH Orphan X’ IPA series.”

“What is SMaSH, you may ask? SMaSH is an acronym for ‘Single Malt and Single Hop’. It’s a relatively new approach to brewing, based on simplicity. But it’s big enough in America that they’re holding SMaSH beer festivals across the country.”

“What a line-up!” says Murray. 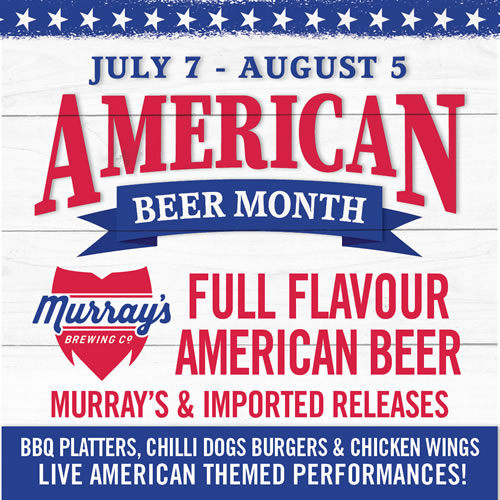